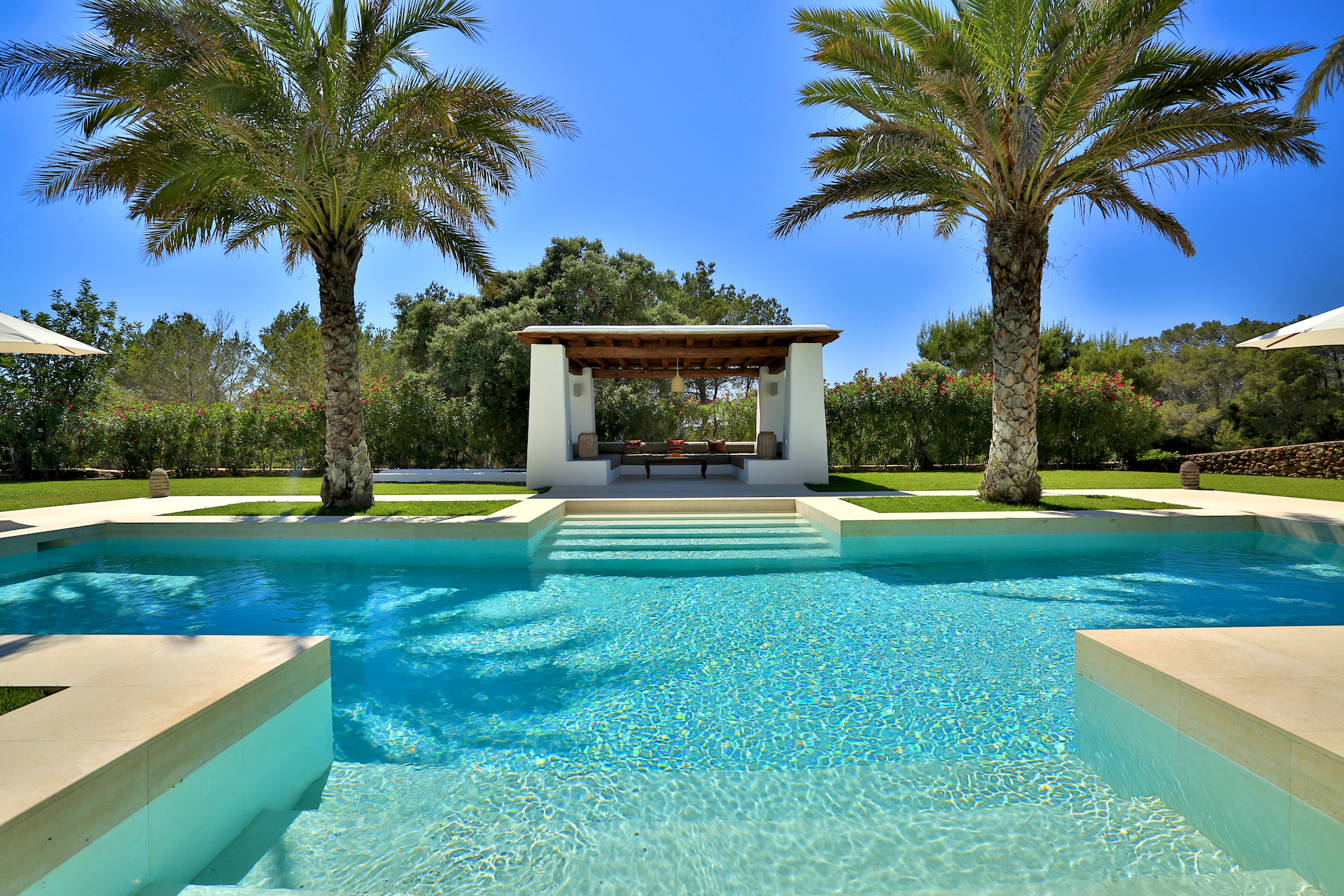 A nicely furnished house just rents better (and is nicer to live in ofcourse ;)…). This week we asked Igor Beuker – Ibiza lover – to tell his story about moving to Ibiza, building a house and furnishing it accordingly. We love his style, a style which is open and fresh which stimulates the rental market on Ibiza.

“Why Can Canto Ibiza is my querencia?

Igor Beuker (45) who was born and raised in Amsterdam is a professional public speaker and trendwatcher that already delivered over 400 keynotes in 42 countries. I was curious and asked him:     You have seen so many places on this planet, why did you fall in love with Ibiza and build a house there?

Igor explains. I never believed in love at first sight, until I went to Ibiza for the first time in 1987. I was 17 and the minute I set my feet outside the airport I felt at home. Weird but true. I could not describe or understand my feeling at that moment and I ignored it. But when I had to go back home 3 weeks later I felt nostalgia, the feeling had become stronger. I did not want to go home.

So before a friend of mine and I drove back to the airport, I told him: You need to drive us to this natural stone company first, I need to pick up a strip of pool tiles. My friend looked at me and asked I had gone insane. Why do you need pool tiles, he asked. I told him, trust me. You might think I am crazy now, but one day I build a house here. I love this island. The pool tiles will help me to keep my eyes on the prize at all times I said. They will help me to visualize and realize my biggest dream.

Visualizing a big dream or goal, has always helped me in my life. No matter how big the occurring problems will be, you will always keep clear sight on your goal. That is a powerful method that fuels focus, motivation and dedication.

I kept visiting Ibiza year-on-year. I even went there off season, in spring and fall. Here I learned that Ibiza had so much more to offer than parties. I discovered so many magical places and met so many creative, free spirits and also foreigners from all kind of countries that had moved to live on Ibiza. These experiences fueled my wish and I knew I had to make a change in my career to be able to make that jump to Ibiza.

So in 2003 (I was 33) I decided to switch my role as chief marketing officer at a listed media company to start my own digital marketing agency LaComunidad in Amsterdam. The name I borrowed from the underground community and party movement on Ibiza called LaComunidad. In 2008 my agency hit its international tipping point, and world leader in marketing and media called WPP (Nasdaq WPPGY) with 180,000 employees acquired LaComunidad. 21 years later, I had earned the opportunity to realize my dream.

I looked for land and houses for almost 2 years. But I could not find a dream location. Until a Dutch friend of mine, who lived on Ibiza with his wife and kids, one night said: A year ago we fell in love with a lovely finca near Santa Gertrudis, but the owners decided to keep it and take it off the market again. We drove there and looked around. It was a very romantic finca indeed and the location was amazing. I located the German owners and asked if they would consider selling it.

I met them, we had lunch and we clicked. But they explained that for several reasons their finca would stay in the family. I understand I said, but I want you to know that if you ever want to sell it or are in need of money, call me and I will fly in the next day to sign the deal. You have my word I said. For 9 months I heard nothing and continued my search. Until one evening, in the spring of 2010. Friday night I received a text message. When I looked, my heart jumped and I could not believe my eyes. A text message from the owners, out of the blue: Igor if you still want our house, you can buy it. When can you be at Ibiza? Monday if I have to, I replied. My heartbeat was going towards 200 bpm. That Monday I flew in, signed and was the proud owner of Can Canto.

Inspired by the Phoenicians who conquered Ibiza in 654 BC, I wanted to work with architect Blackstadt. I loved their style. But in our first meeting on Ibiza, Rolf junior told me that they had so many ongoing projects that they could not accept another large new reformation project. I clearly looked disappointed when Rolf asked: What’s the book you have there? 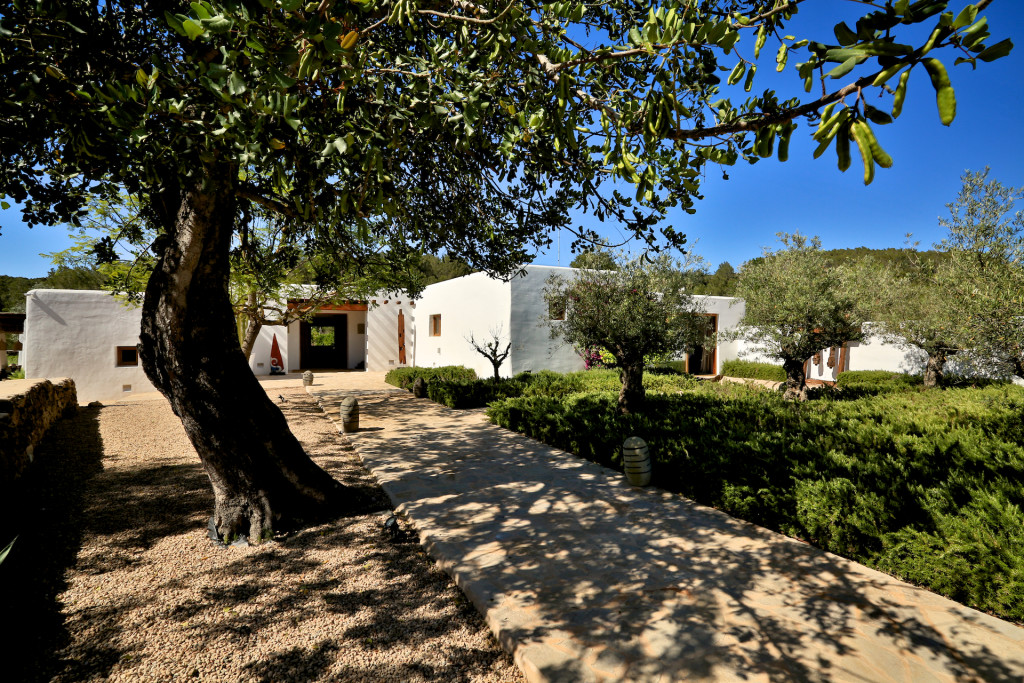 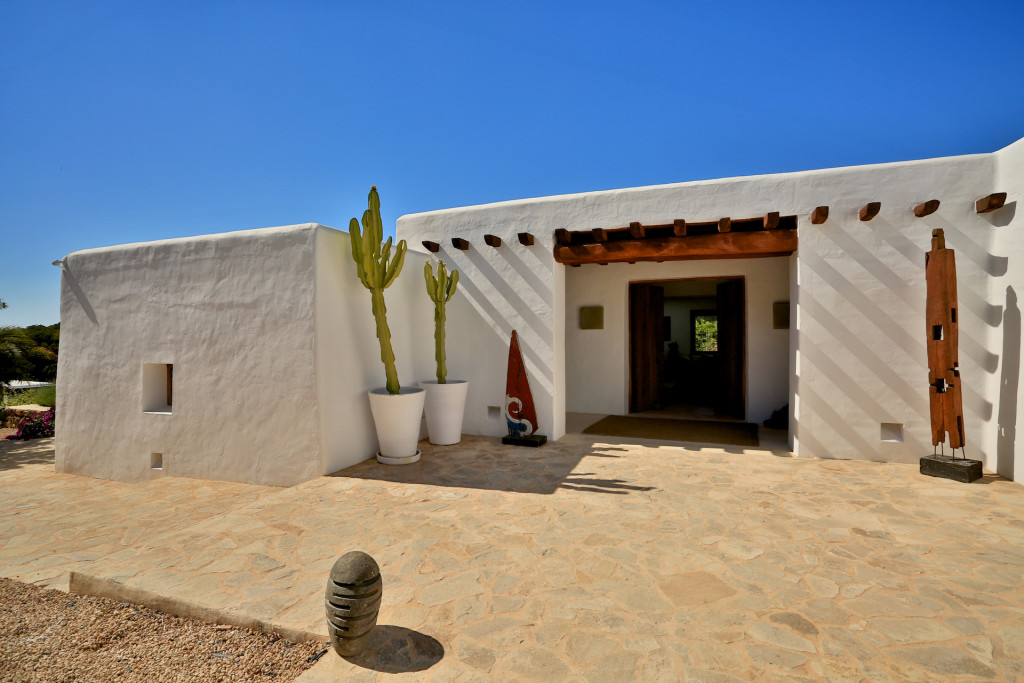 I told Rolf: Well I have this book 10 years already and there’s a house in it I really love. It’s called Can Miquel. I would like to create a similar finca, but a bit more Phoenician style. Rolf had a strange smile on his face and asked: Can you show me the house and tell me why you love it? Passionately I showed him the house and told him what I loved about it. Rolf had a bigger smile on his face but said nothing, until I asked him: What’s up? You have this strange smile on your face Rolf. Why is that? 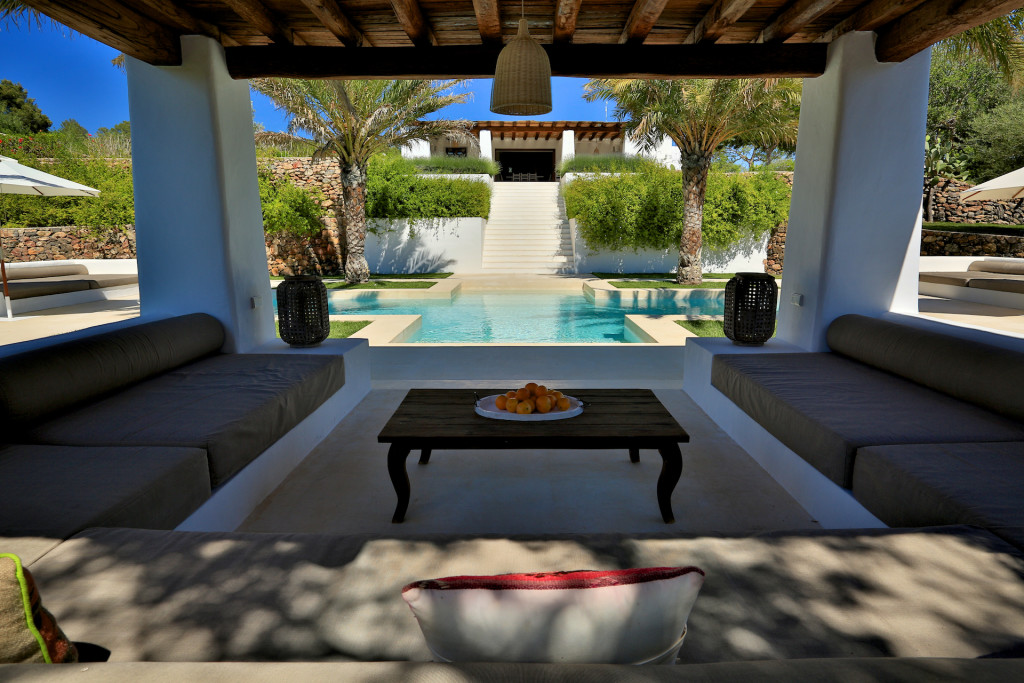 Rolf laughed out loud. He said I was born and raised in that house, Igor. I lived for 23 years in Can Miquel, Igor. My father built it. Do you want to see it? Is grass green, I said with a big smile!  Please, show me the house. Rolf took me there and showed me around. At the end of the one hour tour I asked him: Now the universe has given you a clear message huh, will you design and build my house Rolf? Yes I will, he smiled. And I screamed out loud, yesssssssssss muchas gracias maestro!!!!!!!!

We started the design process and we contracted a builder. I really wanted Rolf’s brother Nial to do the construction, but he was too busy with other projects. So we contracted Blemar, a builder from Ibiza. For Interior design we worked with Alvarez Interiors. 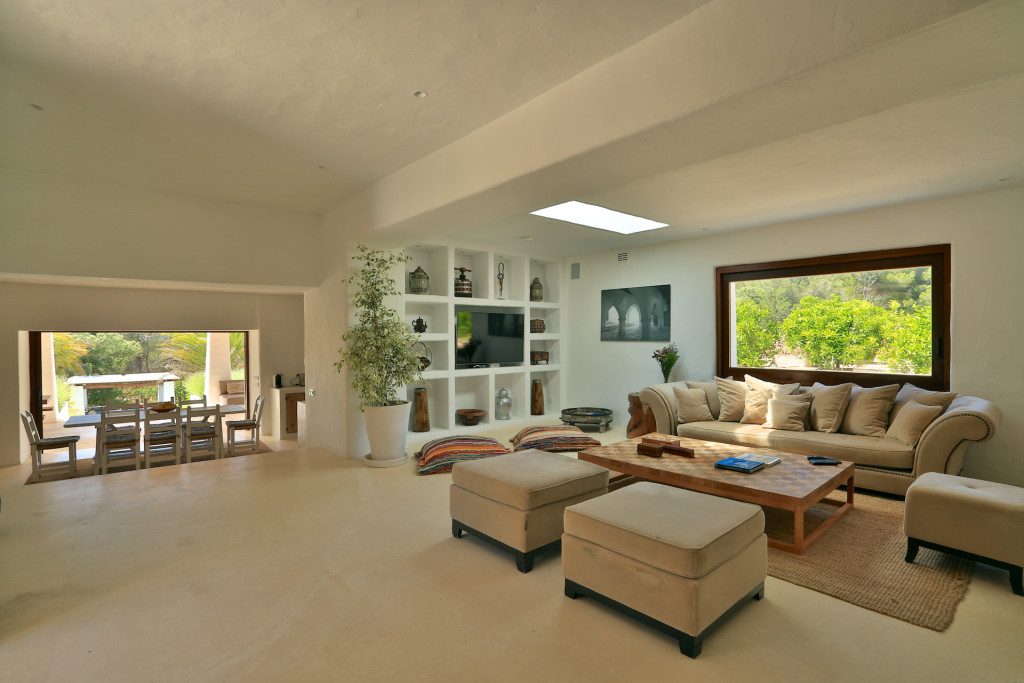 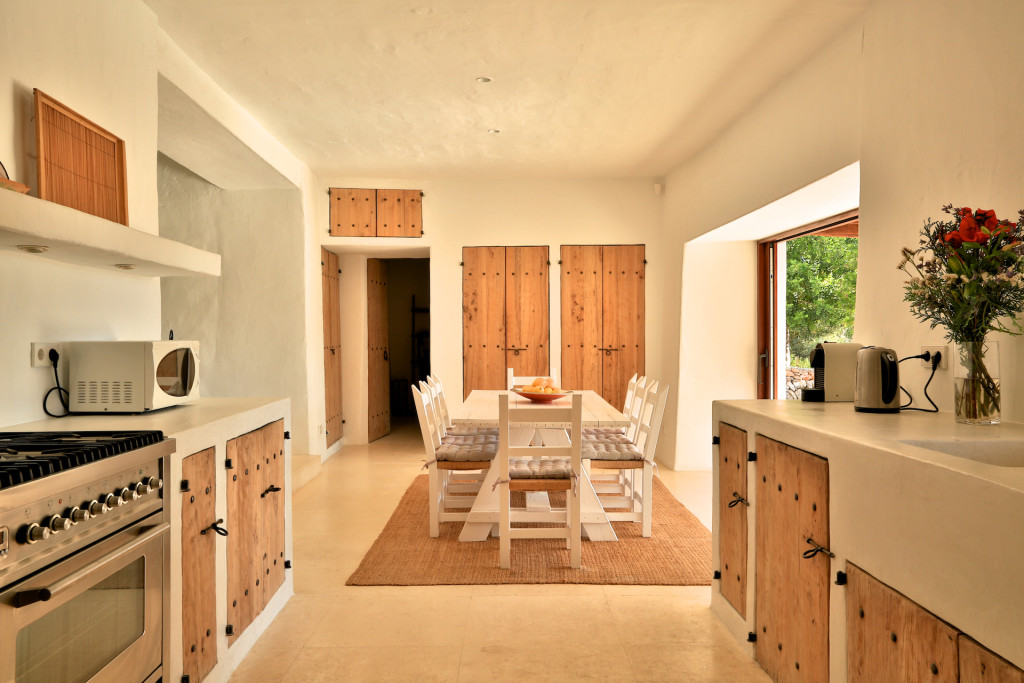 We created a contemporary finca which I called finca 2.0 with bigger windows and in-walled sliding doors. We created long spacious visual lines so it would feel open and spacious but in line with the surrounding nature.

Extra is the ‘advent calendar’ effect in the house. When opening up the wooden shutters and doors, new surprising elements of the house and garden reveal itself. For example when opening the master bedroom shutters, you are surprised by the outside open spa, also inspired by the Phoenician bathhouses.

When opening the front doors, from the gate you can look throughout our house, all the way up into the North garden with lime trees. This concept is like a surprising adventure. Same form the kitchen, sala and portiado: they all overlook the large stairs that cross our pool towards a pergola. Also inspired by Phoenician royal families. 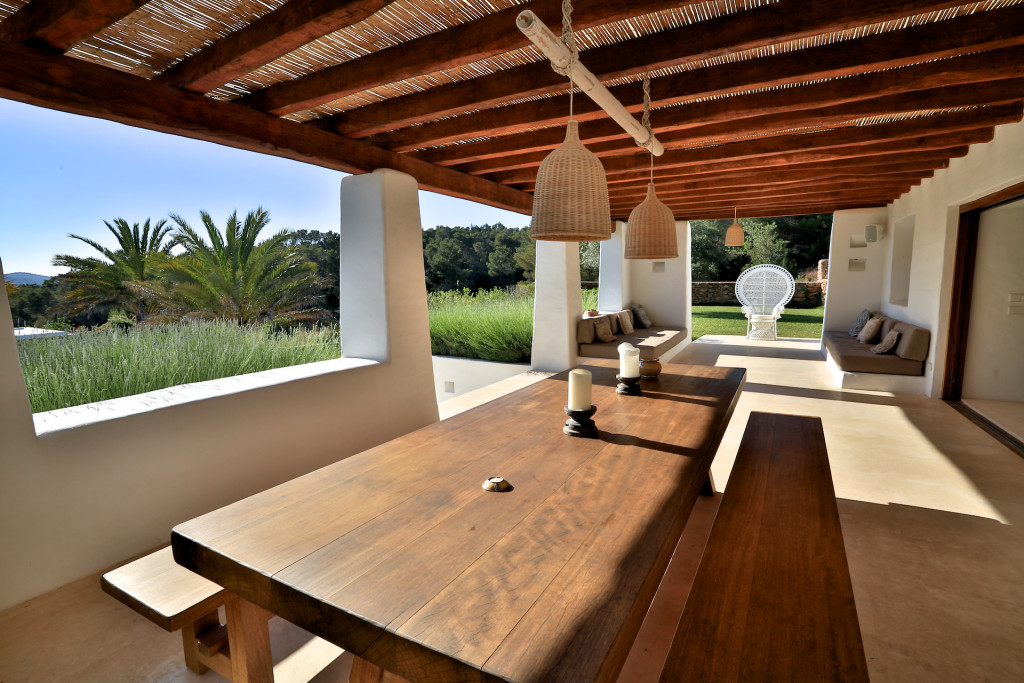 All materials are very natural and the garden naturally flows over into the house. The full reformation took 18 months. The house and its location are very romantic and gets amazing reviews. We even have had several offers of people that wanted to buy the house. Sorry it’s not on the market, I stated every time. 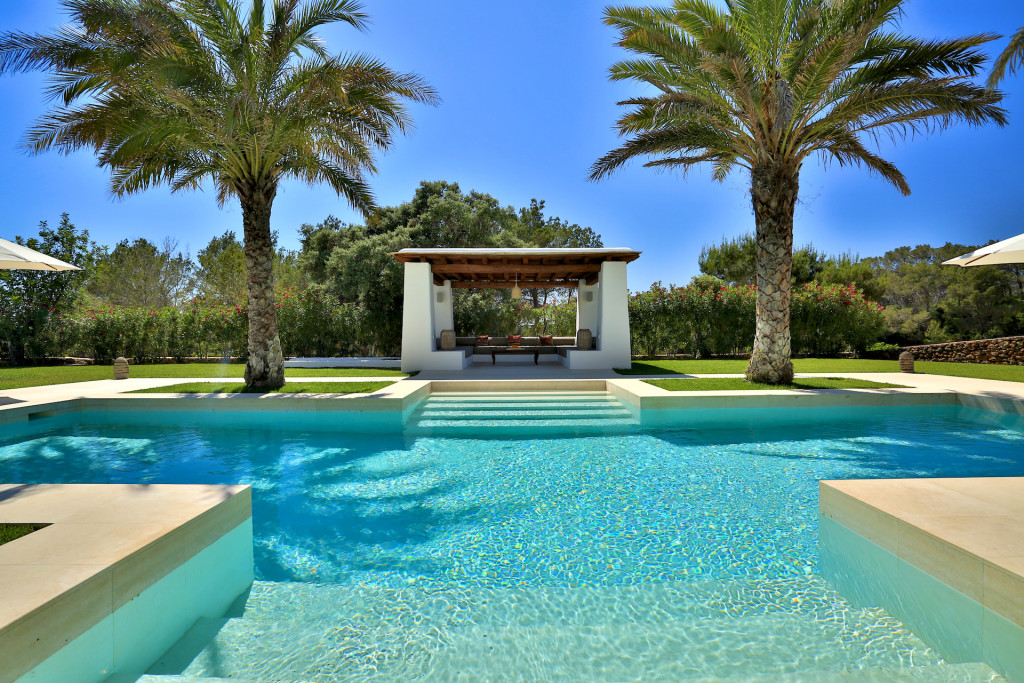 Enjoy your querencia! See more photos of Can Canto Ibiza.

/%postname%/
#
Sort Gallery
on
yes
yes
off
on
on
off